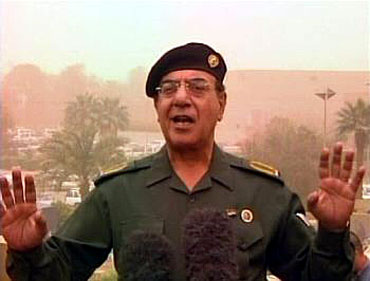 Your news station also understands the value of propaganda.

The truth is simple.

Read what the Founding Fathers had to say:

“Guard with jealous attention the public liberty. Suspect every one who approaches that jewel. Unfortunately, nothing will preserve it but downright force. Whenever you give up that force, you are inevitably ruined.”
– Patrick Henry, speech of June 5 1788

Beware of the government!

When elected, politicians swear an oath to protect and defend the constitution of the United States from all enemies, foreign and domestic.

The “main stream” news are all corrupt, and all promote communism.

Don’t be surprised if you see Mohammed Saeed Al Sahaf working for one of them.

Also remember that those news people you see on tv are all identical to Mohammed Saeed Al Sahaf, in that they are all spreading lies.

The truth is simple.

The government was to be BOUND by the CHAINS of the Constitution.

Neither the Democrats or the Republicans support a free society any longer.

While there are some Republicans that are close to the Founding Fathers, many will in fact vote for such things as a HEAVY AND PROGRESSIVE INCOME TAX, or ANTI-GUN laws.

Very few Democrats are true to freedom any longer.  Most are simply COMMUNISTS and TRAITORS to FREEDOM.

Do not let the truth die in America.